Traditional object detectors are classifier-based methods, where the classifier is either run on parts of the image in a sliding window fashion, this is how DPM (Deformable Parts Models) operates, or runs on region proposals that are treated as potential bounding boxes, this is the case for the R-CNN family (R-CNN, Fast R-CNN and Faster R-CNN). These detectors preform well, especially Faster R-CNN with unmatched accuracy of 73.2% mAP, however due to their complex pipeline they perform poorly in terms of speed with 7 frames per second (fps), rendering them inoperative for real-time detection.

This is where You only look once (YOLO) is introduced, a real-time object detection system with an innovative approach of reframing object detection as a regression problem. YOLO outperforms previous detectors in terms of speed with a 45 fps while maintaining a good accuracy of 63.4 mAP .

In this post I explain how YOLO operates and its main features, I also talk about YOLOv2 and YOLO9000 introducing some significant improvements that addresses the constraints of the original YOLO.

As I stated earlier, YOLO uses an innovative strategy to resolving object detection as a regression problem, it detects bounding box coordinates and class probabilities directly from the image, as apposed to previously mentioned algorithms that remodel classifiers for detection. Let’s look at how this is done.

YOLO splits the input image into an S x S grid, where each grid cell predicts B bounding boxes together with their confidence score, each confidence score reflects the probability of the predicted box containing an object Pr(Object), as well as how accurate is the predicted box by evaluating its overlap with the ground truth bounding box measured by intersection over union \(IoU^{ truth}_{ pred}\).

Note that if an object’s center falls into a grid cell, then that cell is responsible for detecting the object, so each cell aims to detect the object’s center by predicting one set of class probabilities \(C = P(class_i | object)\) for each grid cell regardless of the number of B boxes, it calculates class-conditional probabilities because it assumes that each cell contains an object. 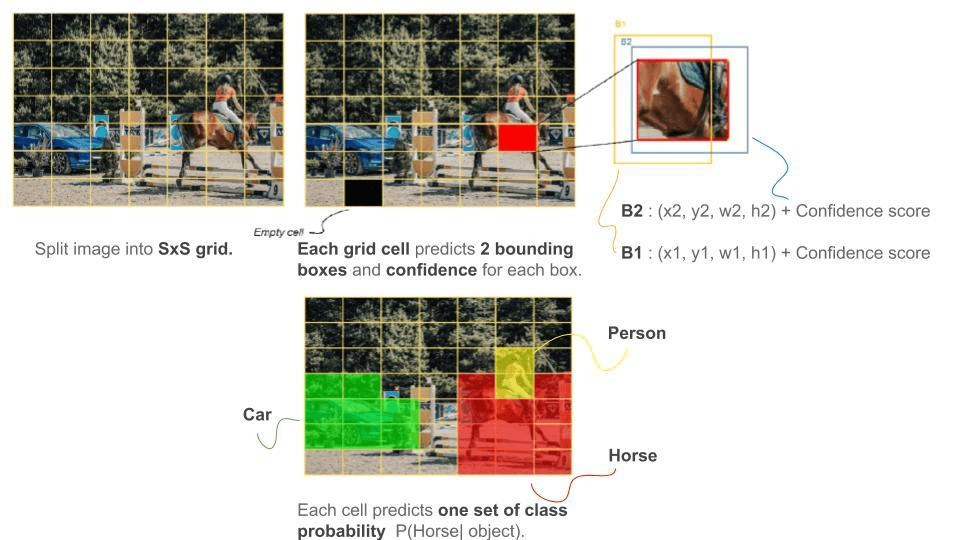 The architecture of YOLO is extremely influenced by GoogleLeNet, the network consists of 24 convolution layers for feature extraction followed by 2 fully connected layers for predicting bounding box coordinates and their respective object probabilities, replacing the inception modules of GoogleLeNet with 1x1 convolution layers to reduce the depth dimension of the feature maps. 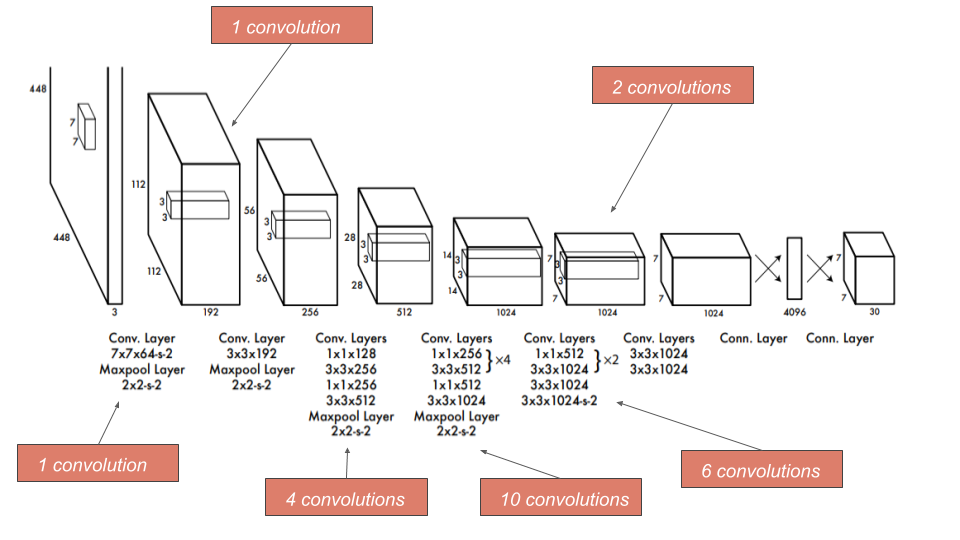 Fast YOLO a relatively smaller network of 9 convolution layers, is also introduced by the authors, this over-simplified network structure contributes to an impressive speed of 155 fps, becoming the fastest detector in object detection literature, but still achieving a relatively low accuracy of 52.5 mAP.

The objective function of YOLO may look intimidating, but when broken down it is fairly understandable.

Confidence loss. Due to the grid paradigm of YOLO, the network generates a large set of boxes that do not contain any object, so these predictor boxes get a confidence score of zero. Note that these empty boxes overpower those containing objects, thereby overwhelming their loss and gradient. To tackle this problem, we decrease the loss of low confidence predictions by setting \(\lambda_\text{noobj} = 0.5\).

To ensure that the confidence loss strongly upweights the loss of boxes that contain an object (i.e. Focus training on boxes containing an object), we set the following mask \(1^{ obj}_{ij}\)

This makes the confidence loss as follows :

localization loss. SSE also equalizes error in large and small boxes which is not ideal either because a small deviation is more prominent in a small box than in a larger one. To resolve this, we predict the square root of height and width coordinates instead of the height and width directly.

Additionally, the loss function only penalizes the localization error for the predictor box that has the highest IoU with ground truth box in each grid cell in order to increase the loss for bounding box coordinates and focus more on detection we set \(\lambda_\text{coord} = 5\). Therefore, the localization loss becomes : 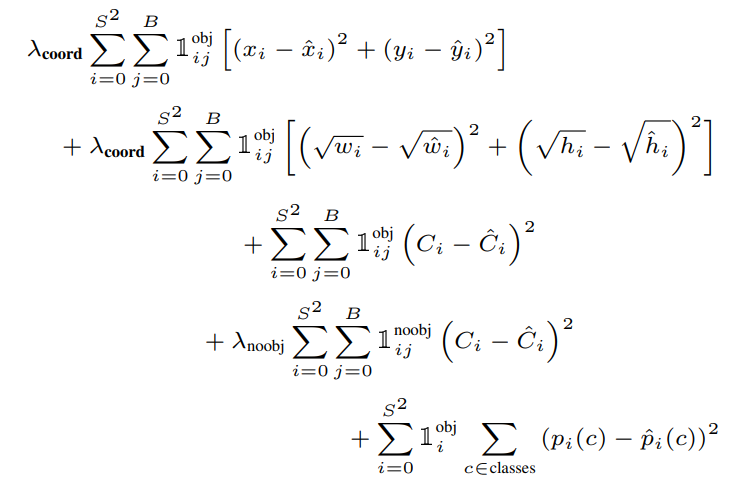 Due to its simplified and unified network structure, YOLO is fast at testing time. On Pascal VOC, YOLO predicts 98 bounding boxes per image with corresponding class probabilities.

Considering that large number of predicted boxes where multiple boxes detect the same object, we perform non-max suppression (nms) to keep only the best bounding box per object and effectively discard the others.

This is how nms works:

For the rest, for each class :

By using nms, the performance of YOLO improves by 2-3% mAP.

Although object detection applications have tremendously improved with latest advancements in computer vision based on deep learning, the scope of object detection is still restricted to a small set of objects, this is due to limited number of labeled datasets for detection.

The most prevailing detection dataset Pascal VOC detects 20 categories, similarly MS COCO detects 80 categories comprising thousands of to hundreds of images, while classification datasets have millions of images with hundreds of thousands of categories. This is primarily owing to the difficult task of labelling dataset for detection while user-supplied metadata such as keywords or tags associated with the image provide the job of classification effortlessly.

Furthermore, since the original YOLO model (let’s call it YOLOv1) suffers from localization errors and low recall predictions, the paper presents YOLOv2, which proposes novel and prior work-based improvements, namely SSD, to address the above constraints and further increase the speed vs accuracy trade-off.

The authors sought to make YOLO faster while performing more accurately, hence the humorous title of the paper “Better, Faster and Stronger”, thus proposing the the following improvements to achieve each of these goals :

Adjustments for a better YOLO 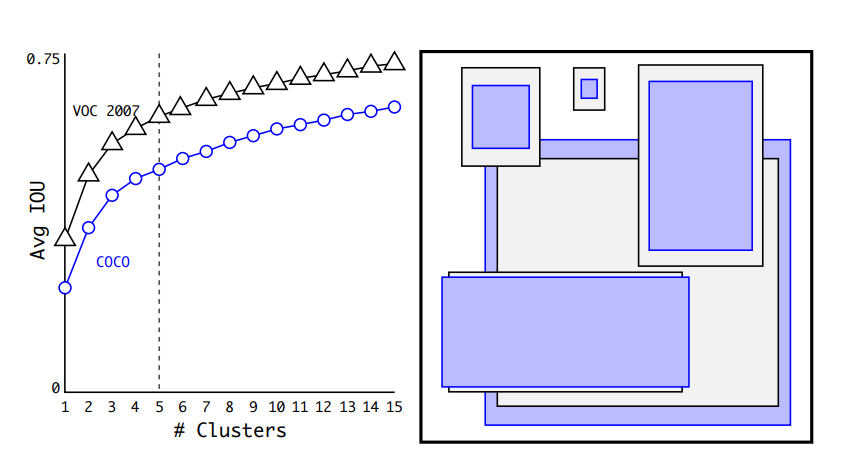 Left: For different numbers of clusters k we plot the average IoU score, k=5 offers a good trade-off for model complexity vs recall. Right: The 5 anchor box shapes selected for COCO in blue and Pascal VOC 2007 in gray color (source)

This approach improves accuracy by 5%.

The following plot is created to evaluate the performance of YOLOv2 trained on VOC 2012 with different input dimensions against its counterpart detectors: 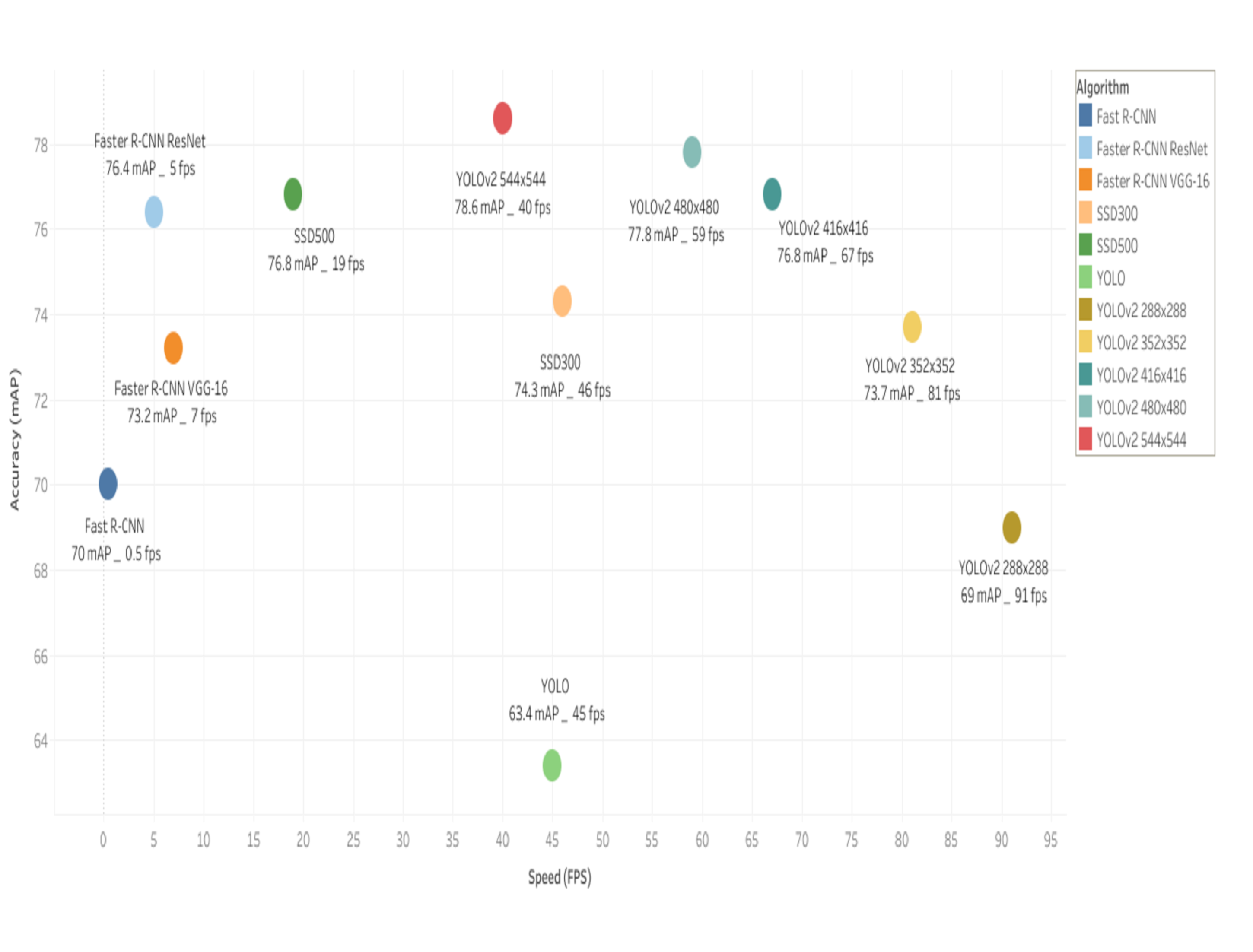 Accuracy and speed on Pascal VOC 2007

Most of object detection methods use VGG-16 as a base feature extractor, it yields good results in terms of accuracy nonetheless, it has a complex architecture, it requires 30.69 billion floating point operations to process a single image at a low resolution, which is undoubtedly a concern when dealing with low latency applications.

While YOLOv1 leverages GoogeLeNet architecture which is relatively fast with 8.52 billion operations for a forward pass, it falls short in terms of accuracy achieving 88.0% mAP on ImageNet compared to 90.0% mAP with VGG-16.

In YOLOv2, the author sought to maximize performance by developing a custom network that is both accurate and fast to support applications that require near real-time speed such in self driving cars. This is where Darknet-19 is presented, Darknet-19 achieves 91.2% accuracy, but most importantly, the processing of an image requires only 5.58 billion floating point operations.

We use batch normalization to ensure stability during training and allow faster convergence. 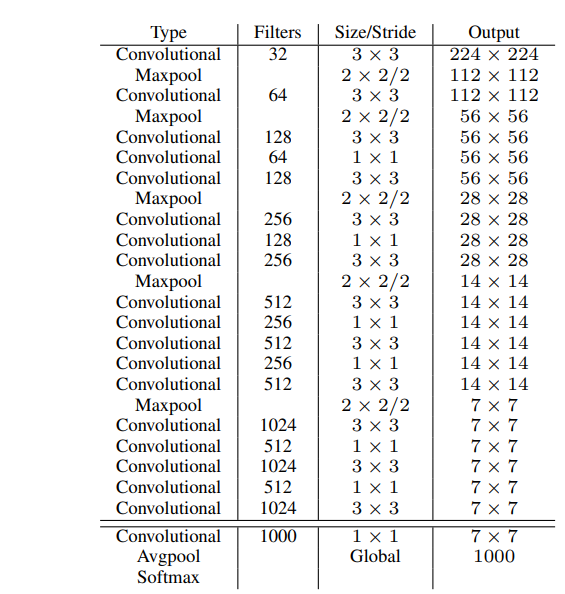 Training for classification & detection. According to the above mentioned training strategy, YOLOv2 trains the classifier on ImageNet with low resolution input of 224x224 for 160 epochs, then fine tunes it on high input resolution of 448x448 for 10 epochs. To fine tune the resulting network for detection, we substitute the last three convolution layers with 3x3 convolutional layers with 1024 filters, followed by a final 1x1 convolution.

Since we want the network to output predictions for 5 anchor, for each anchor predict 4 bounding box coordinates, confidence score and 20 class probabilities, we use (4+20) x 5=125 filters. The network is trained for 160 epochs, it starts with a learning rate of \(10^-3\), then the learning rate is divided by 10 for every 60 and 90 epochs.

In addition to the above-mentioned improvements with YOLOv2, the paper also presents YOLO9000, a real-time system that detects more than 9000 objects categories by combining COCO’s detection dataset with ImageNet’s classification dataset. YOLO9000 learns detection-labeled data about the bounding box coordinate prediction and obje ctness score, and from the classification-labeled data, it learns new categories of deeper range to expand the number of categories that the model can detect.

But how does this work?

We could use a softmax function to output the probability distribution across different categories, but the softmax assumes that the classes are mutually exclusive, which is not the case in our scenario as COCO has more generic categories such as “dog” and ImageNet has more specific categories like dog breeds e.g. “Norfolk terrier” and “Yorkshire terrier”. However, If we consider the task to be one of multi-label classification, by using a sigmoid function we completely discard COCO’s data structure with mutually exclusive classes.

On the other hand, it’s not wise to assume a flat structure to the labels, as the classes are hierarchically structured. That’s why we use WordNet, a lexical database that groups words into synonym sets called synsets and structures their semantic relationships in a tree where sysnets are on the same level and hyponyms are lower level nodes in the lower level to the current node. 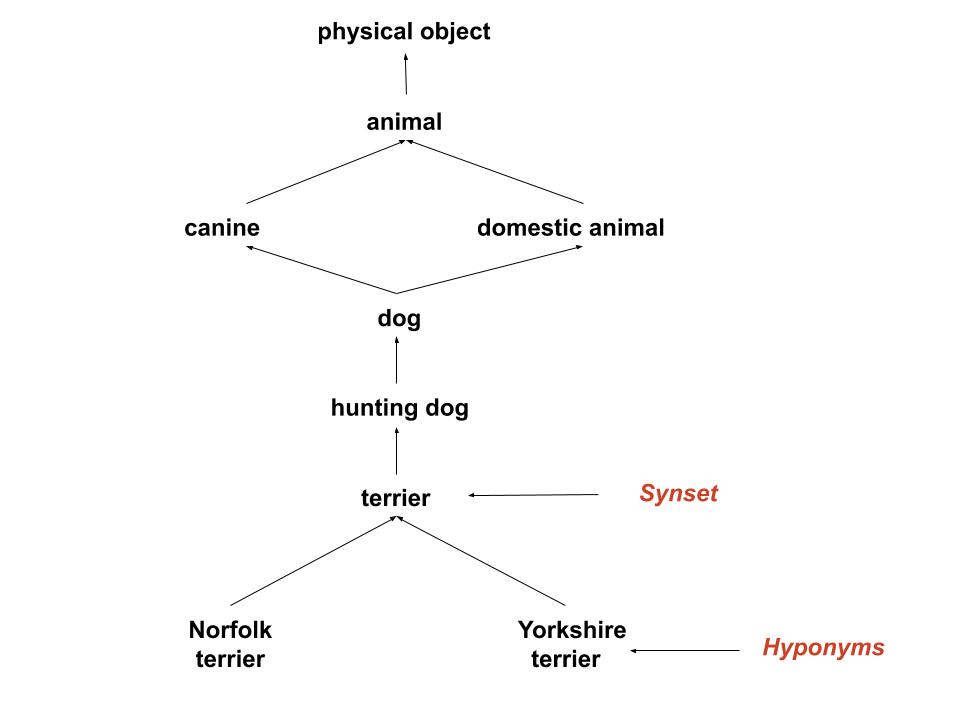 Small subset of the graph for illustration purposes only.

However, to simplify the problem we don’t use the full graph structure of WordNet, we just want ImageNet’s categories so we construct WordTree, a hierarchical tree that only includes WordNet’s extracted ImageNet labels.

But how do we perform classification with WordTree?

We also consider the intermediate nodes to train Darknet-19 on WordTree, which extends the label range from 1000 ImageNet classes to 1369.

During training, the network propagates the tree so that a node category can also be labeled as the categories in the path to the root node, e.g. “Norfolk terrier “ can also be labeled as “terrier” and “hunting dog”, etc. This way even if the model is uncertain of the breed of the dog, it can always bounce back by predicting it as a “dog”.

Furthemore, in order to compute these conditional probabilities, the model outputs a 1369 vector on which we apply a softmax function to predict probability distributions, but we do not apply it as usual over the entire vector, we use multiple softmax over the synsets which are hyponyms of the same concept.

Now after training on WordNet built on ImageNet, we combine both datasets ImageNet and COCO with WordTree by simply mapping the labels to synsets in the WordTree hierarchy. 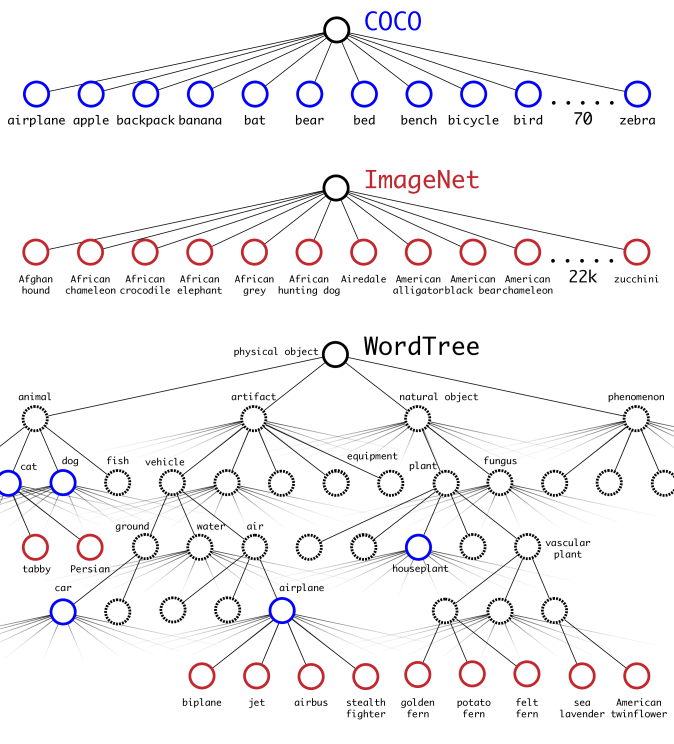 To evaluate the model, we use ImageNet detection challenge categories that shares 44 object categories with COCO, leaving 156 object classes that the model did not train on for detection. On the 156 unseen labeled data for detection, the model achieves 16 mAP and 19.7 mAP on the entire testing data.

Generally YOLO9000 generalizes well on objects that are sub-classes of categories that the model learned in the training set, such as new animal species, but fails to model categories such as clothing mainly because COCO has no category of clothing type.